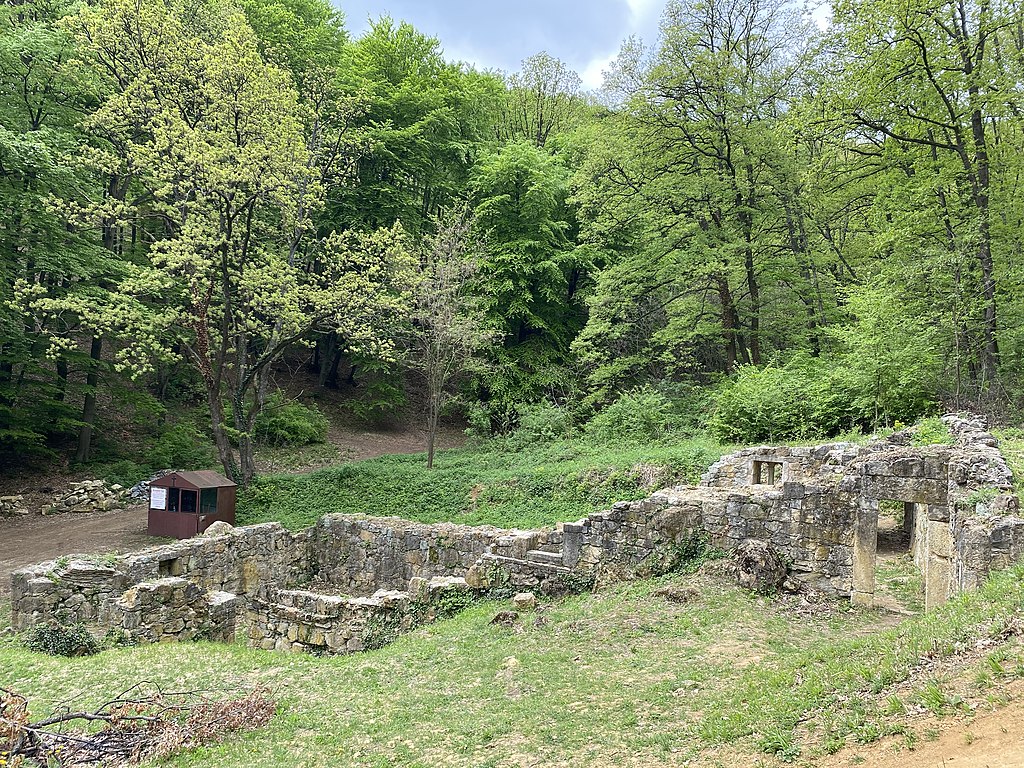 As soon as you descend from the top of Kosmaj on steep forest paths, you come across a real medieval lost treasure – the old walls of the Kastaljan monastery and lighted candles on the place where the church once stood.

In a beautiful place, hidden from the main roads, Kastaljan is known mainly only by the locals, who do not allow the shrines to be forgotten, but also by those who refer to it with the intention and knowledge of this place in order to explore it themselves.
Everything looks like a labyrinth of old walls, and through the vegetation that swallowed the whole building, large remains of walls, doors, windows and rooms can be clearly seen.

It was once a very large and important complex for Belgrade’s history. It doesn’t take much imagination to imagine the liveliness that once reigned in this place, in the last happy age of Serbia before the collapse in the centuries-old occupation.

It was created at the end of the 13th century, most probably during the reign of King Dragutin. The monastery consisted of a church, a large residence, a dining room and a cemetery.

It is assumed that the building was renovated by despot Stefan Lazarević, who rebuilt the church, boarding house and dining room. Proof of this are the remains of decoration characteristic of Moravian architecture.
By the way, despot Stefan Lazaević was tied to Belgrade, which recently owed him a monument, but also to the mountain Kosmaj.

The monastery was dedicated to St. George, and it is noted in old writings that in the middle of the 16th century it had a brotherhood of as many as 10 monks.

At that time, the village in which it was located was called Gornja Trnava or Trgovčević, and today it is part of Nemenikuć. During the Ottoman occupation, the monastery was first deserted, and then it was destroyed in the 17th century, after the “Great Migration of Serbs”. By the way, the church was built of stone, but then it was also plastered.

Despite the fact that the complex looks as if only bare walls remain, experts have managed to discover fragments of frescoes, ie their decorations, ornaments and a few Cyrillic letters.
Three graves of monks were discovered in the area in front of the church, but no notes on their names. Older graves were also found under the foundations of the lodgings…

By the way, Kastaljan was certainly not such a desolate and hidden place in the Middle Ages – part of the lodgings was reserved for passers-by who did not come to the monastery. These were various passengers and caravans that stopped in front of Kastaljan.

However, even before the Serbian monastery, there was something here – even the ancient Romans chose that place for a military camp, in order to protect the Kosmaj mines.

When approaching this place, you must still keep in mind that you are entering the sanctuary, that is, that it is not just the empty walls that have been swallowed by plants.

Namely, two decades ago, the first service after three centuries was held on St. George’s Day. The abbot was also appointed, but for the eventual renovation, the completion of the complete archeological research would still have to wait.

In some other countries, the remains of ancient monasteries and fortifications have become a kind of tourist attraction. In Serbia, too, it has become an increasingly common practice in recent years, although the loneliness and isolation of the Castilians on Kosmaj are exactly what gives it full charm and makes it a real pearl, lost in time, forest and past centuries of silence.

If you soon find yourself in Belgrade and want to go to nature, enjoy the silence but also the beauty of Kosmaj, do not forget to visit this monastery!