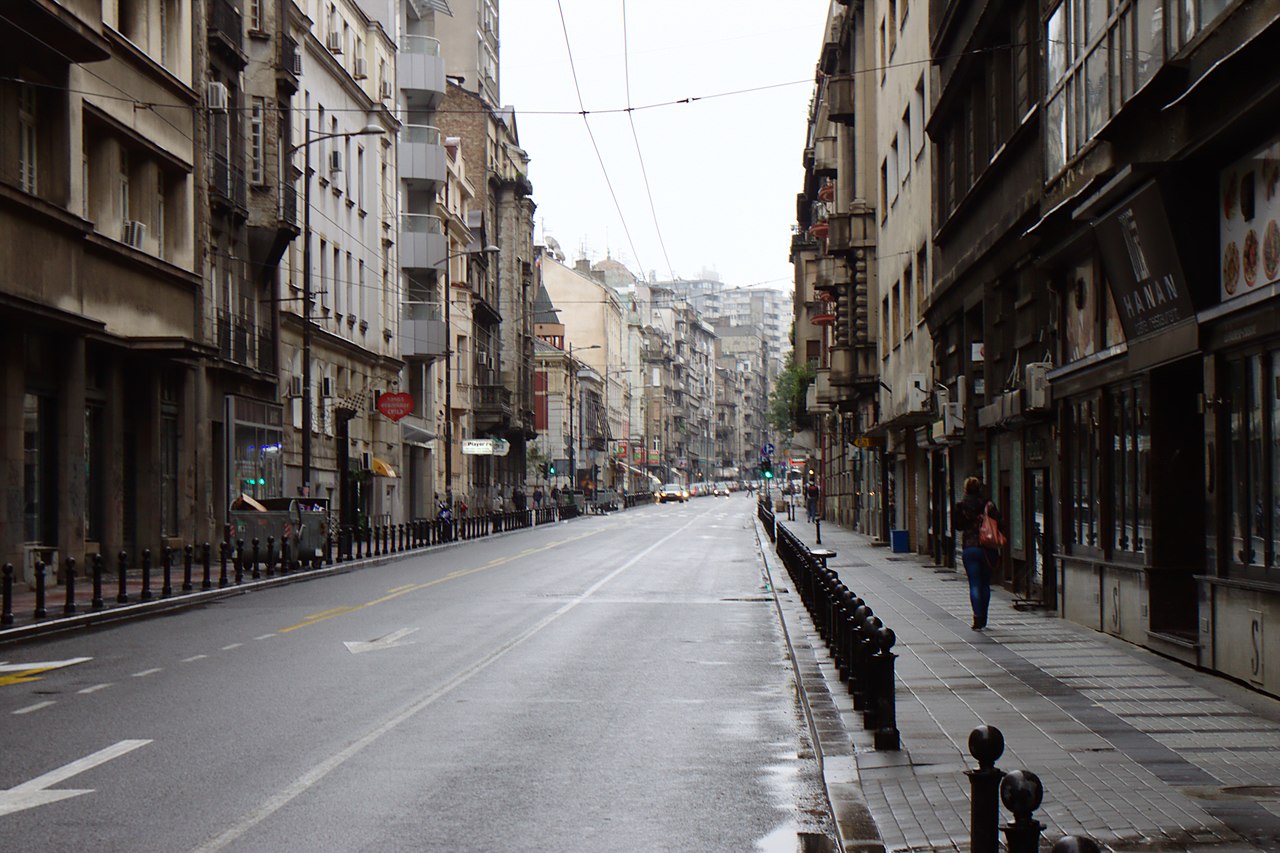 In its appearance, Hilandarska Street has always resembled some streets of Vienna and Paris. It exudes a characteristic peace and simplicity, and, although in the very center of the city, it is without the great commercial splendor of shop windows, instead it is decorated with quiet and elegant buildings.

According to the old Belgrade plans from 1853, today’s Hilandarska was just a dusty road that led to several gardens.

It received street status only in 1872, and in 1865 the foundation stone for the state hospital was laid in the nearby present-day George Washington Street, which had a decisive influence on the fate and status of Hilandarska. Because, down on the corner, there was a tavern that also offered lodging: it was quickly nicknamed “The House of the Seven Swabians” because the German paliers who managed the construction of the hospital lived there.

At that time in our country there were a lot of German surveyors, painters, painters, facade workers, masons, because there was a lot of construction at that time, and the Germans were our guest workers.

Later, the tavern in which seven Germans, builders of the hospital, lived, was demolished to build a new building in which the restaurant “Vidin-kapija” was located, in the sixties of the 20th century.

The company “Kod sedam Švab” was painted by the famous Đura Jakšić, and he was paid for it with food and drink. It shows seven Germans dressed in characteristic caps, chasing a rabbit.

Next to that tavern was the famous Belgrade soda maker Erlich, and right next to it lived the old official Simić. Across the street was the house of Prote Đoka Cvetković, which was later demolished to build a five-story building, also in the middle of the 20th century.

His son, the famous actor Brana Cvetković, lived in a shanty until his death. He and his wife Kaja, whom they called Mrs. Brana, spent their lives there. Their apartment was as beautiful as a box and smelled of make-up and perfumes, especially Simon cream.

House of the manager of the state hospital, dr. Laza Lazarevica, is also in Hilandarska Street and is still in the same place. It is said that he was always in a hurry to get to work and that in order to shorten his journey he went through other people’s gardens. The largest was Metropolitan’s, so this area was later called Metropolitan’s garden, and since 1924 it was divided into Kopitareva gradina, Teodosijeva, Šafarikova and Đura Daničića streets.

After 1920, Russian refugees opened their tavern “Letnji sad” on a plot of land near that garden overgrown with old trees, which was their meeting place.

The Metropolitan’s Garden stretched downhill all the way to Despot Stefana Street. Prof. Stevan Okanović once found himself in this garden and secretly recorded the lamentations of Queen Natalija to the metropolitan.

In 1900, the whole of Hilandarska had only three municipal lanterns and it was dark when there was no moonlight. The street was guarded by a patrolman, one of the heroes of Brana Cvetković’s cabaret “Orfeum”.

Croatian poet Matoš lived in this street, as well as Dubrovnik count Ivo Vojinović. Matoš wanted to be close to the esteemed poet Jovan Ilić and his family, among whom was the great Vojislav Ilić. The poet Milutin Bojić was born and spent his short life here. Then Nušić’s sister and brother-in-law, the big bankers Petrović, Dr. Laza Lazarević lived there…

The family houses of brothers Milan and Dragoljub Antonijević are on the corner of Đura Daničića Street, and both were designed by Milan, the first Belgrade architect to open his office. He designed many houses, he is the author, among others, of the Palilula elementary school, the hospital complex in Vračar, the Grand Hotel, the Anker Palace in Terazije and many other family houses.
Milan’s house has a beautiful garden with art nouveau decoration and his brother’s home was much more luxurious with a European layout and this building now houses the Brazilian Embassy.

The house at Hilandarska 15 is also worth mentioning. Its owner was Milenko Materni, our famous hockey player, and the author was the famous architect and professor Andra Stevanović. The facade is eclectic, with a rustic ground floor and a corner cubicle, while the decoration is Art Nouveau.

Unfortunately, many beautiful houses are no longer there due to accelerated urbanization after the Second World War, such as the Obradović family house with a shop on the ground floor. It was designed by Stojan Veljković, who worked with the famous Otto Lorenz. The facade was decorated with rich secession decoration with women’s masks – garlands and festoons. Although it was under protection, it was demolished and a substation was built in its place in the early sixties.
Among the more recent buildings, an important building by Nastas Savić was built in 1937 with two facades, on the corner of Vlajkovićeva and Hilandarska, which has a twin house on the corner of Takovska and Svetogorska, and was built by his partner Sima Nikolić.

The first house next to the Radio Belgrade building, which was designed by the famous studio of architect Momčilo Belobrk, belongs to the same period, but to a slightly different style. It has a simple Bauhaus-style facade and is very luxurious inside with a pink marble lobby with a small fountain.

At the corner of Cetinjska and Hilandarska is certainly the most monumental building in the entire street – the endowment of Evgenija Kiki, née Naumenović, which she left to Belgrade’s merchant youth in 1932.

She was the wife and widow of the benefactor Nikola Kiki, a rich merchant, who bequeathed all his property to the education of merchant youth. This palace was initially a boarding school and school for young merchants. It did not change its purpose even during socialism, when it was the Home of Students in the Economy, and everyone knew it as the Kiki Palace.