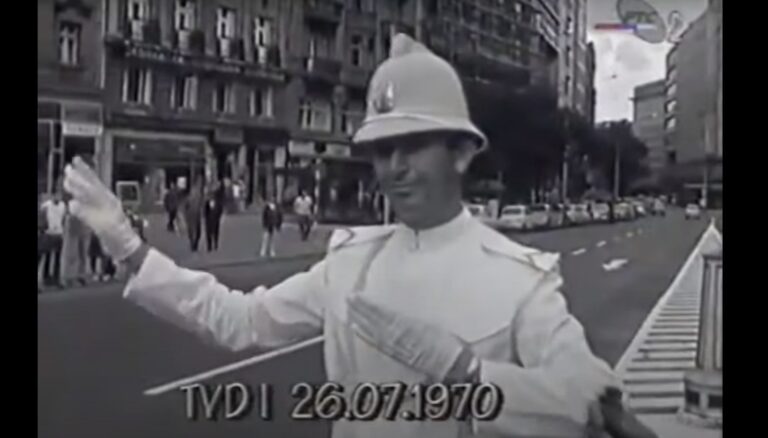 At the beginning of the seventies of the 20th century, Belgrade had one traffic policeman who stood out so much that he came to Queen Elizabeth of England. At one time, it was a trademark of the Yugoslav capital, and if you don’t know who it is, be sure to follow the continuation of this Belgrade story.

Jovan Bulj, born in 1939, was a legendary Belgrade trafficker with the most graceful movements in regulating traffic. Citizens testified that it was really a pleasure to watch him work in a white uniform, with white gloves and a white helmet. He mainly regulated the traffic at the exit from the Terazije tunnel, near the Youth Center, on Terazije and near London to Kneza Miloša.

For years, citizens have been spreading stories about where Jovan got such graceful movements, and it was even rumored that he had completed a several-month ballet course at the National Theater. However, he graduated from the Police School in Sarajevo, and for his movements he “blamed” playing sports, but also his love of work.

Love of work – “star from the street”
Citizens loved Jovan more and more. Both the drivers and the pedestrians stood to say goodbye to him and see how he was doing his job. It is known that everyone likes to make progress, but not Jovan. He liked to regulate traffic and increasingly bought the sympathy of his fellow citizens. Newspapers started writing about him, and he soon became interesting to television.

Many say that he often knew how to send kisses, both to those behind the wheel and to all passers-by.

Call to London and traffic regulation on Piccadilly
The most interesting moment of his career was when he was noticed on the streets of Belgrade by the mayor of London who was visiting Belgrade. Impressed by his movements and appearance, he invited Jovan to London. Then he showed his skills on the famous Piccadilly Square.

Who was bothered by the most beloved traffic policeman?
Unfortunately, the beloved career of Jovan Bulj ended prematurely. Did anyone mind the influence he had on his fellow citizens or is it something else? First, Jovan was moved from the busiest streets to less busy streets. It was rumored in the city that the then Belgrade government did not like him because he attracted too much attention and created big crowds around him. However, even on less busy streets, Jovan continued to attract attention, so he retired in 1980, when he was only 41 years old.

Since then, he has worked for a long time as a salesman in a tobacconist’s office in block 70 in New Belgrade, and after that as a parking lot guard in front of the rafts on the Sava quay. He died in Belgrade in 2010 at the age of 71.

It is rare today to meet someone who has brought so much life and love into a job that does not require it and is not like that by nature. That is why the people of Belgrade claim that his spirit is still felt above the crossroads near London.