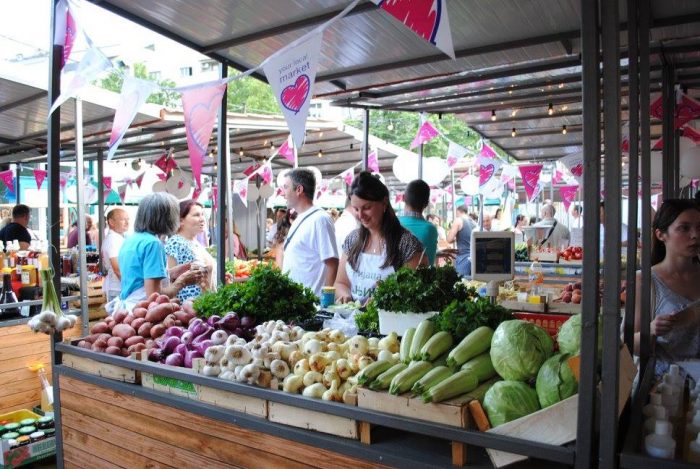 If you ask Belgraders about Skadar Market, there is no doubt that you will confuse them. There is no one who doesn’t know about Bylon. You will easily reach this magical market located near the city center, although no one calls it by its official name. Built back in 1927 on the site of a former pond, Bajloni has been supplying Belgraders and their guests for almost 100 years.

The Czech Ignjat Bajloni is the founder of the open market, which the inhabitants of the capital persistently and without discussion have been calling by his name for almost a century, although the city authorities have formally given it another name.
Ignjat Bajloni had a legendary large steam brewery at the bottom of Cetinjska Street, next to Skadarlija, and his work was also the draining of large ponds that once covered the area where the stalls are located today.
Bajloni’s market in Belgrade is the only place reminiscent of the name of the Belgrade trading family Bajloni, whose property was confiscated after the beginning of the war in 1941. At that time, the family left Serbia and never returned. After the Second World War, in 1946, the market changed its name to Skadarlija.

A colorful oasis on the edge of a bohemian quarter

It was built between the two world wars when goods were sold mostly in bulk. At first it was quantum, and after the Second World War it became a colorful market. The opening of the quantum market was an extremely important issue for the city. All food wholesalers were scattered in all markets and around all markets. The court concentrated them on two markets, Bajloni’s and Zeleni venac.

It was placed on the lawn in winter, it was all in the mud, as well as during disasters. In the summer it was all in the dust. The planned works of arranging the market in 1930 included the leveling of the terrain, the introduction of sewerage, concreting and fencing.

Its history is also the old tavern Šaran, where traders celebrated good market days. Old cafes are still located in the vicinity of Bajlonija, and in them you can see neighbors every day who are returning from the market, with bags full of greens, sitting down to drink coffee and brandy. And the bohemian spirit that rules this part of the city attracts artists and creatives – sometimes you will see a violinist there who paints the day with classical music, attending a sudden performance by alternative artists…

It was reconstructed at the beginning of 2016. Official statistics say that this market supplies about 100,000 consumers.

Ignjat Bajloni was born in Litomysl in the Hazburg Monarchy, later in the Czech Republic. He was educated for the leather trade and together with his brother he was engaged in this business. Inspired by great ambitions, he made the decision to move to America, from which he soon returned because of his sister and son-in-law who live in Serbia.

Together with his wife and four sons, he returned to the capital in 1885 and settled on Topčidersko brdo. In the lower part of Skadarlija, in 1884, he bought a small hand brewery, in the vicinity of which the swamp is full of mosquitoes. The bar dries up, and the brewery develops so much that, after his death, in 1900, she won significant awards for her products at the world exhibition in Paris. Due to the great commitment to Belgrade, the market was named after its founder.