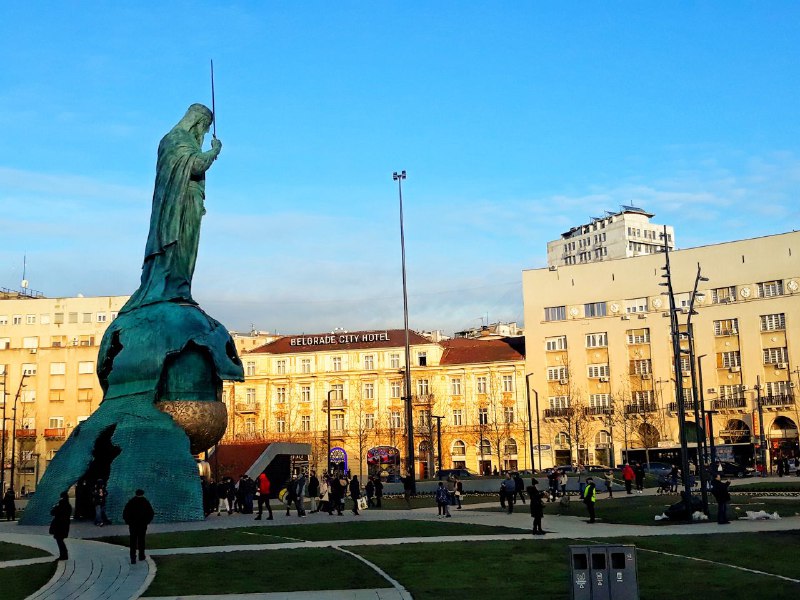 The monument to Stefan Nemanja is located on Sava Square in Belgrade, in front of the former Main Railway Station. It is dedicated to the great prefect Stefan Nemanja, the founder of the Serbian medieval dynasty Nemanjići. It was erected on January 21, 2021.

About Stefan Nemanja
Stefan Nemanja was a medieval Serbian nobleman, the youngest son of the lord Zavida, the great prefect of Raska and the founder of the ruling dynasty of Nemanjic. He is considered one of the most important Serbian rulers. During his life, he built and renovated a large number of churches and monasteries that are considered his endowments. He donated land and money not only to the Orthodox, but also to the Catholic Church in Bar and Dubrovnik. Together with his son Sava, he is considered the father of the Serbian Orthodox Church.

About the monument to Stefan Nemanja
The monument represents an upright ruler figure of Stefan Nemanja in a noble uniform. He has a sword in his right hand and a Himalayan charter in his left. Initially, a cross should have been in his hand instead of a sword, but that idea was abandoned. The architect who designed the monument, Aleksandar Rukavishnikov, explained that the reason was because he wanted to present Stefan Nemanja as a fighter for the Serbian people and state and not as a monk, in which case a cross would certainly be more appropriate. Together with the pedestal, the monument weighs about eighty tons and is over twenty meters high. With these dimensions, it ranks among the tallest monuments in Serbia. The monument attracted a lot of attention from tourists and Belgraders very quickly.

How to get to the monument to Stefan Nemanja?
As the monument is located near the city center, it is easy to reach. Nemanjina Street leads directly to the monument and the place around it is well covered by public transport lines: