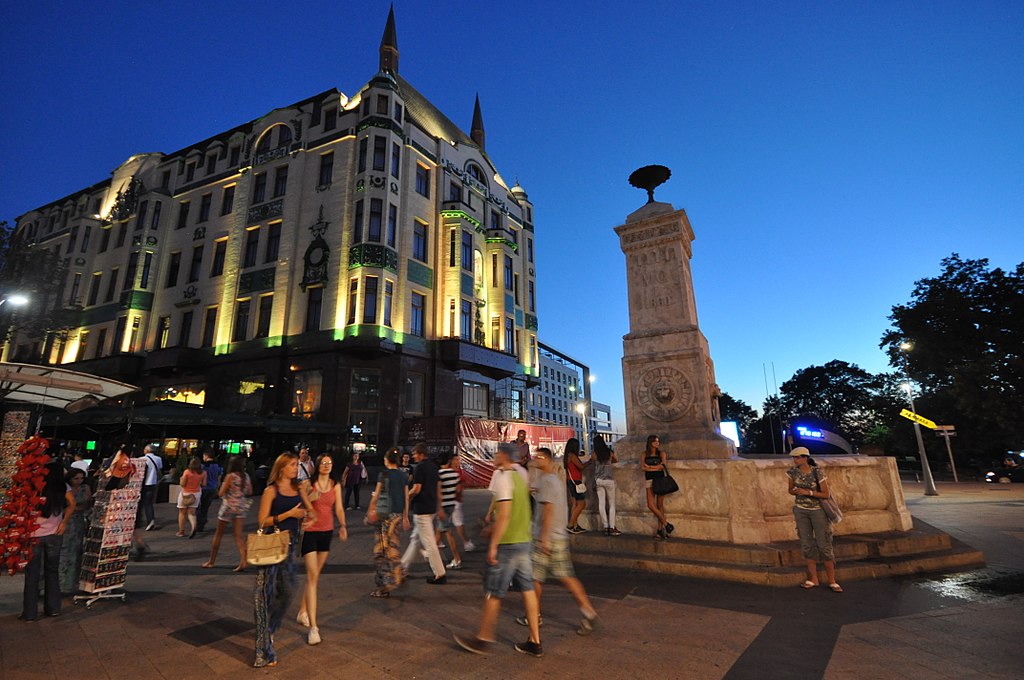 Hotel Moskva is a former Palace of Russia and the building of the insurance company Russia in Belgrade. The building was designed by architect Jovan Ilkić and a group of architects from St. Petersburg. Construction of the hotel began in 1905, and two years later the works were completed.

The grand opening was performed in two parts. On the Serbian New Year, on January 14, 1908, King Peter I Karadjordjevic opened the Palace of Russia with the Moscow Inn. A few days later, the opening ceremony was organized by the King’s Guard Orchestra.

Since the middle of the 20th century, Hotel Moskva has been declared a cultural monument of the city of Belgrade and is under state protection.

For a whole century, in the heart of our capital, there is the Hotel Moscow – one of the oldest and most famous hotels in our country. As Belgrade became larger and more modern, so did the Hotel Moskva occupy an increasingly important place in its history. Since its founding in 1908, more than 45 million people have passed through this hotel, and about 4.5 million guests woke up in its rooms and apartments. A good part of those phenomenal statistics are made up of extremely famous and famous people who marked the time behind us.

Hotel Moskva can rightly boast of a hall of fame where, in memory of famous guests, their photos were posted. But that’s not all, because the picture frames, of all those who marked the existence of this oldest hotel of ours, are also in front of the apartments in which they were accommodated during their visit to Belgrade. The walls of “Moscow” hide a rich history, and the premises of this hotel have always been an ideal backdrop for grand celebrations, which were organized as part of important guests and events. Often, famous guests were fun with their behavior, creating a good atmosphere, an atmosphere to remember for hotel visitors. So is the legendary Toma Zdravković,
known as the great Serbian bohemian, he used to leave the room with a glass in his hand and compose his songs on the spot, which soon became great hits and bohemian anthems.

There was everything in this hotel. Throughout its history, this hotel has witnessed weddings and partings, love quarrels and reconciliations, secret meetings and negotiations, but as a good hotelier as a doctor, he does not reveal the secrets of his dear guests to the public. The memories of all those who worked at the Moscow Hotel are woven from such secrets. However, the arrival of famous guests was not only followed by the eyes and ears of professional hoteliers, but also the people of Belgrade were very interested in all the important people who visited it. It will be retold forever how the famous physicist Albert Einstein hung out with passers-by in the war of his wife Mileva Marić in the garden of the hotel, and the people of Belgrade called their “Serbian son-in-law” “Mr. Crazy Scientist”. All that made him just laugh.

The famous director Alfred Hitchcock was fascinated by the appearance of the hotel, and in the decades that followed his arrival in Belgrade, this hotel was also visited by many of his colleagues Roman Polanski, Bernardo Bertolucci and Milos Forman. Another star of the seventh art, actor Jack Nicholson, was a guest of the Moscow Hotel during the film festival in the 1980s, and then he said that Serbian film is much more complex than Hollywood productions. That this hotel exudes a specific glamor and tempting atmosphere is evidenced by the fact that Nicholson was not the only big Hollywood star who visited it. At the beginning of his career, while shooting one of his first films, the guest of the Moscow Hotel was the “golden boy of Hollywood” Brad Pitt.

Those who collaborated with him on the film “Dark Side of the Sun” directed by Bozidar Nikolic, say that Brad Pitt was delighted with the panorama of Belgrade and Kosutnjak, but also with the Moscow Hotel where he stayed during his acting preparations. The Hollywood star of our origin, Mila Jovović, was also a guest of this hotel, and Robert De Niro, Kirk Douglas and Michael Douglas, Albert Einstein, Indira Gandhi, Ray Charles also stayed there …