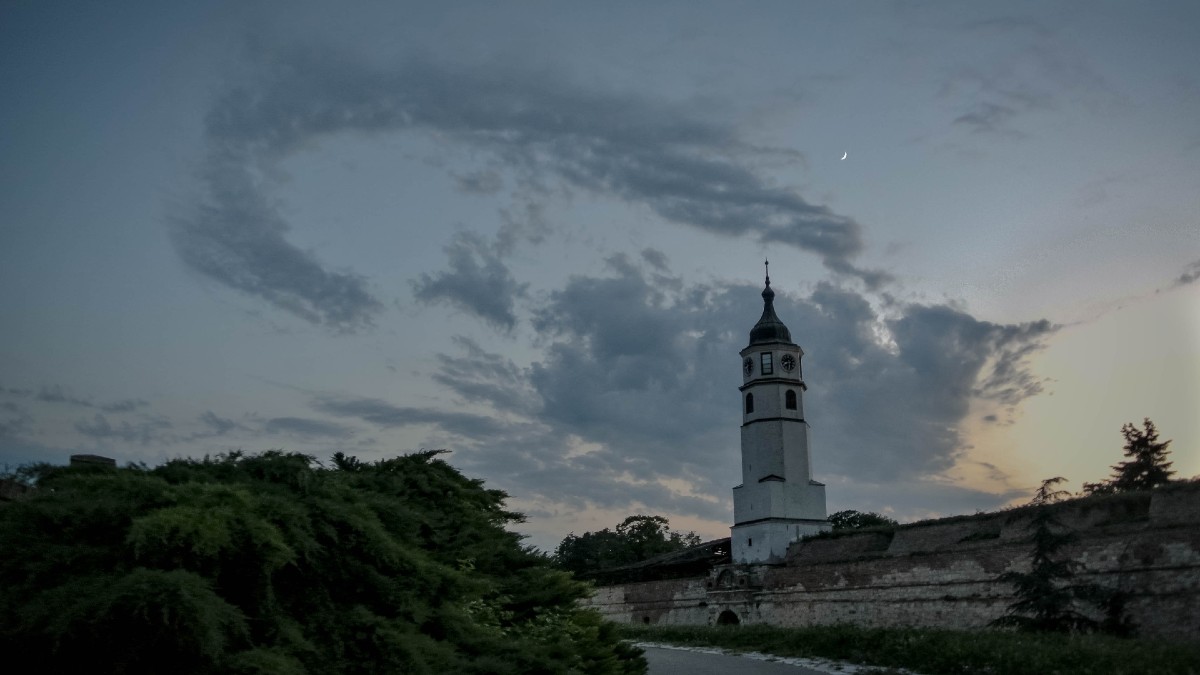 At the frontier of empires and the junction of the great Danube and Sava rivers, this is one of the oldest cities on the continent. As proof of the constant war and upheaval few buildings in Belgrade are older than a couple of hundred years.

But Belgrade is no less compelling for its tumultuous past, blending high culture with a fun-loving spirit. You can sense this lust for life on Skardarlija, the Bohemian street, or the splavovi, party boats that are moored on the Danube and Sava. Belgrade’s fortress dominates the cityscape, while orthodox churches and palaces for the Serbian royalty cropped up after Serbia won independence in the 19th century.

On a tall ridge where the Danube and Sava rivers meet, Belgrade Fortress used to contain the entire city and has lived through 2,000 years of conflict.

All of that bloodshed seems very distant when you see the young couples arm-in-arm in Kalemegdan Park, watching the sun go down over Zemun.

They’ll find perches on the ramparts and secluded cubby holes among the angular remnants of the anti-artillery bastions and ravelins built by the Ottomans in the early modern ages.

There’s history at every turn in the fortress, from the Roman well to the medieval gate of Despot Stefan Lazarević.

But Pobednik (Victor) is the postcard monument, a statue wielding a sword and falcon atop a Doric column.

The National Museum was founded in 1844 and has over 400,000 archeological and historical-artistic objects in its collection. The greatest value kept in the National Museum is Miroslav’s Gospel, which is the oldest and most precious Cyrillic manuscript from 1190.

During the ancient construction of the museum, many pits, wells and cellars were found on the present site, as well as the excavations of the former Istanbul Gate. At that time, the museum building was a real palace of its time. It was built on the principle of the Neo-Renaissance with elements of the Neo-Baroque. Today, there are collections organized in four departments: archeology, the Middle Ages, modern art and numismatics.

The Nikola Tesla Museum was founded in the house of George Gencic, built in 1927. The year of the museum’s founding is 1952, with a permanent exhibition about the life of Nikola Tesla and his inventions and contributions to the sciences of electricity and magnetism. There is also authentic documentation as well as working parts of Tesla’s inventions.

Thanks to Nikola’s cousin Sava Kosanović, all the personal documentation and property of our scientist were transferred from America to Belgrade in 1951. Among the rich documentation are documents, photographs, books, magazines, plans, drawings and other historical and technical objects of this world-famous scientist.

Built in 1975 as the winter garden of the then President of Yugoslavia Josip Broz, this residence was converted into a mausoleum after his death, the place where Tito was buried, as well as his wife Jovanka.

The House of Flowers, which was called “Flower Shop” during Tito’s life, covers an area of ​​902 m2. There were rest rooms, a lounge, a guest room, a library and an open terrace overlooking Belgrade. Today, this landmark belongs to the Museum of the History of Yugoslavia in Dedinje and is one of the most visited tourist places in Belgrade.

The Church of St. Mark

The Church of St. Mark from the list of Belgrade landmarks was built between 1931 and 1940, but the outbreak of World War II swept away construction, in that period only construction work was carried out, but despite that worship was performed during and after the war, until November 14, 1948. Then, Patriarch Gavrilo Dožić consecrated the temple from the list of Belgrade landmarks, and the temple was officially opened for worship.

The monument to Prince Mihailo Obrenović

The monument to Prince Mihailo Obrenović from the list of Belgrade landmarks is located on the Republic Square and is popularly known as the meeting place of “Kod Konja”. The monument from the list of Belgrade landmarks was erected in 1882, and it represents Prince Mihailo Obrenović as a rider. The author of the monument is the world-famous sculptor Enrico Paci, while the decorative reliefs were designed by Konstantin Jovanović.

The monument to Mihailo Obrenović is a kind of symbol of the liberation of Serbia from the Ottoman rule, and the statue of Prince Mihailo symbolically points to the then unliberated areas.

It is cast in bronze and consists of three parts, a pedestal, a pedestal and a statue. The decoration of the pedestal was made according to the drawings of Konstantin Jovanović, and the relief shows scenes from Serbian history. The pedestal was placed on a supporting pedestal lined with marble slabs with six bronze slabs with the names of liberated Serbian cities.

The largest Orthodox Church in the Balkan region, and the second largest in the world, St Sava is an ever-present monument in Serbia’s capital.

High on the Vračar plateau, you can see the church’s white granite and marble walls from any approach to Belgrade, while the 50 bells that sound noon ring out across the city.

The temple is built on the site where the Ottoman Grand Vizier Sinan Pasha burned St Sava’s relics after his icon had graced flags during a Serbian uprising in 1594. Construction began in 1935, 340 years after that event, and ended in 1989. The biggest challenge was raising the central dome, all 4,000 tons of which was assembled on the ground and hoisted into place.

When you have already reached the church of St Sava, be sure to visit the Desanka Maksimović Endowment.

Desanka Maksimović’s endowment is located in Skerlićeva Street. The National Library of Serbia is the founder of the Desanka Maksimović Endowment by the decision of the Board of Directors, and the task of the Endowment is to create conditions for preserving and permanently nurturing the memory of this great Serbian writer. The Desanka Maksimović Endowment annually awards the prize for poetry on the day of her birth on May 16. The award consists of a monetary award, a charter and a statuette of Desanka Maksimović, and it is awarded to poets for their overall contribution to Serbian poetry and can only be awarded once. The endowment then publishes a collection of poems by the award-winning poet with a preface and a selected bibliography.

This museum on Nikola Pašić Square stages only temporary exhibitions on themes dealing with Serbia’s past.

One recent exhibitions for instance was dedicated to the 13-century prince and monk St Sava, who essentially founded the Serbian Orthodox church.

Another show recounted Serbian life during the First World War, while others have handled topics as diverse as the First Serbian Uprising at the start of the 19th century, Serbian sculpture, iconography and the trailblazing Serbian-American physicist Mijajlo Pupin.

A rare survivor from the first reign of Prince Miloš Obrenović, this palace dates to the beginning of the 1830s and was supposed to be a lavish seat for the Serbian court.

But the continued presence of the Ottomans meant that it was never used for that purpose.

Prince Miloš was only an occasional visitor until he was forced to abdicate in 1839 and the Obrenović family was expelled.

The permanent exhibition is a series of richly-furbished rooms with authentic period items assembled from various homes once owned by Belgrade’s bourgeois and royal families.

You’ll track the transition from the oriental Ottoman style on the lower floor to more western European decoration that was en vogue later in the 19th century.

On Republic Square the National Theatre is somewhere to go for a feast of high culture at a very affordable price.

The venue opened in 1869, and has come through war damage and a few architectural updates to remain an esteemed beacon of Serbian culture.

During the day you can go on a backstage tour to discover how the wardrobes and scenery are stored and maintained, and will be treated to an aria by the theatre’s singers in residence.

There’s a varied schedule of drama, opera and ballet at the theatre, always high brow and always unbelievably affordable thanks to state subsidies.

In the oldest part of Zemun, a monument from the days of the Austro-Hungarian Empire is lifted over the right bank of the Danube.

The Gardoš Tower is also known as the Millennium Tower as it was built in 1896 to celebrate 1,000 years of Hungarian settlement on the Pannonian Plain.

With an Eclecticist design it was constructed over the ruins of a medieval fortress and was one of several big projects around what was then Hungary to mark that anniversary.

Inside is a small exhibition about the storied history of Zemun and Gardoš, while you can head to the top for a supreme view of the Danube and the confluence.